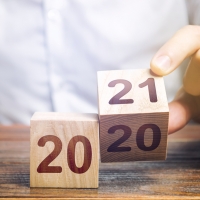 It was interesting for many reasons but we will stick to talking about the Toronto, Oakville and Burlington markets in this edition.

Generally speaking, I believe most of us were quite surprised to see the final results.  By now I am sure you have seen the numbers.  The volume of sales and cost of a home increased substantially in 2020. This is unless you are speaking of the downtown condo market and I will address that later in this article.

There were a number of reasons why the market turned out the way it did.  For many, the pandemic has caused untold misery that is hard to understate.. For some industries, such as on-line services, (Zoom) and at-home exercise, (Peleton) there has been an increase in sales and growth that is still happening.  That, coupled with the fact that there is nothing much to spend money on, Canadians have been saving their money.  With low interest rates they are now wanting to get in the market or purchase a more expensive home in the city or move out to areas like Oakville and Burlington.  Inventory has been low since 2017 everywhere and so another industry that did well was real estate.

Demand, along with low supply, is what happened and frankly we don’t see that changing for 2021.

Let’s talk about the condo market for a bit.

The first problem it had in downtown Toronto was an over-supply of properties.  This was because due to the pandemic the demand went down quickly.  The AirBnB business has all but disappeared, the rental market suffered because young people moved back home and the student population, which is fuelled by foreign students, also dried up.  If you were an investor you wanted to sell and if you were a person living in a downtown condo you wanted to move, thus creating the huge supply. The reverse of what happened elsewhere happened in the condo market; lots of supply, very little demand.  The market is down right now but I would never count it out.  People will move back to the core, I am already seeing signs of that.

What are we predicting for 2021 and what should our Sellers and Buyers think about?

There are two opposing forces happening.  Pulling down real estate is the COVID pandemic and the unpredictability of it’s effect on the Canadian economy.  Pulling up the market is the continued lack of supply that just doesn’t seem to be changing.  We think that because of the pent-up demand, the fact that people saved money this year and the continued low interest rates, the Toronto, Oakville, Burlington markets will be extremely busy.  We also expect the condo market to improve for all of the same reasons plus the fact that the students are coming back and the immigration that was halted is going to increase as the government has stated they intend to increase limits for 2021 to get it going.  Canada’s economy depends a lot on immigration and with the vaccine rollout this is one of the government's mandates.

What this all means is that for various reasons both Sellers and Buyers are going to benefit in 2021 in the real estate market and we are here to help!